The word evokes so many images, ideas, opinions, and emotions that it’s difficult to know where to start.  But it’s been on my mind of late, so I’ll give it a shot.

I guess I should begin by admitting (despite my predisposition towards misanthropy) that I’ve been quite lucky in love.  I’ve been blessed with a family who has always been extremely demonstrative and supportive; great friends, many of whom I may not have appreciated as I should have; and a wife that continues to adore me, despite my flaws.

I’ve definitely made a few mistakes in my search for companionship over the years, but, then, who hasn’t?  And, in retrospect, many of those mistakes were nothing more than perceptual – based on my confusing the “idea” of love with the real thing.  It’s such an easy mistake to make, after all, that I can’t help but wonder if that isn’t the reason for so many of the unhappy relationships out there…  When you’re desperate to live in romantic bliss, sometimes a mirage of love can be overwhelmingly appealing, even if reality proves unhealthy.

In my writing, I’ve tried to use my experiences (limited as they may be) to bring realism to the relationships between my characters.  It’s important to me that they’re not immune to the kinds of problems that afflict many searching for love.  Infatuation is a major theme that I’ve tried to explore, as is idolization (who among us hasn’t “crushed” on someone who barely knows you exist?).  I’ve also tried to explore the depths of the “true” love that exists between my characters.  As those of you who’ve known “true” love can attest, it often manifests very differently than how it’s presented to us in the media.

Don’t get me wrong, bliss does exist.  I’m not trying to convey the message that love is an illusion, or that it is any less wonderful than what we’ve been presented with in fiction and fantasy.  I simply wish to impress upon you that “true” love will manifest differently for everyone, and that it’s in love’s idiosyncrasies that it’s true wonder lies.

Real love will anchor you, when you are feeling lonely and adrift;

It will heal the scratches from all of life’s nettles;

It will guide your dreams, and shape your reality;

Filed under Miscellaneous, What I'm Working On

Creativity, Have You Been Swallowed By The Collective?

So, it seems to me that people, these days, are suffering from a nasty case of Groupthink, or “Collective” thinking (to borrow a concept made famous by the Borg in Star Trek: The Next Generation).

Imagine, if you will, that you’re driving along a busy city thoroughfare, and you hear about a delay in the route ahead.  Naturally, being a clever one, you detour and bypass the slowdown using a “secret” little-used side road.  A few minutes later, however, you’re brought to a jarring halt, and you discover that a hundred other people have had the same thought, and are now clogging your detour route!

If you’re anything like me, you understand just how incredibly frustrating this can be.

Yet, it’s only one example highlighting just how pervasive the problem of “Collective” thinking has become.  And, as tempting as it might be to blame this kind of thing solely on the overreliance on GPS technology, or Social Media, I think that the issue might actually have deeper roots…

Over decades, we’ve shaped a society of people who define themselves by the music, books, movies, and television series’ that interest them.  We bond over shared media interests, using them like a social lubricant.  While this kind of definition might not have been harmful a generation ago, I think that, in the digital age, it may be the cause of an eventual amputation of original thought.  If we’re all being fed the same media diet, after all, it’s natural that our perceptions and reasoning abilities would tend to converge – that we react similarly, because of shared experiences.  But, what if that diet consists only of junk and regurgitated material?  What if everyone is fed intravenously and simultaneously?  Have we become too similar?  And, at what point do we sound the alarm?

Don’t act like you don’t know what I mean.  Lately, it seems like everything produced in the entertainment industry is either an adaptation of an existing material, or a sequel to something that was once unique.  The shocking lack of originality was laughable at first, but it has become more than a little disturbing.  What’s worse, however, is that it’s so pervasive…  Cultural diversity is being lost the world over, to the detriment of us all!

I know what you’re going to say.  You’re going to remind me that shared interests encourage cultural similarity, and help bond groups together – which, in evolutionary terms, is a good thing.  And you’d be right, if we were living in small semi-isolated communities.  But, because we now have cities that are almost unsustainably overcrowded, and a world that can transmit data in seconds from one side of the planet to the other, we are hindering, rather than helping, our own evolution.

When I was in University, I learned about evolution and speciation.  I remember, in particular, learning about two groups of African lions.  One pride was typical and lived in a territory bordered by other prides, where, over generations, confrontation and cross-breeding occurred.  The second pride, however, lived in a segregated territory, isolated from the larger population of lions.  Although large enough to sustain a basic level of genetic variation, the isolated pride’s evolution was demonstrably more rapid, over only a few generations, than the first pride.

The point, if you’ll indulge me, is that… if we want to see variation and novelty in creativity (and day-to-day thought, for that matter) we need to step away from the “Collective.”

We need to “unplug,” even if only for a few minutes a day.  Seek out a new experience, or learn something new (something traditional or, perhaps, unconventional).  Visit a grandparent, or elderly relative, and listen to a story from their youth.  Don’t Tweet about the experience, don’t take any pictures of it… just absorb it.

If we allow that knowledge, or experience, to become part of who we are – as something unique to us – and let it nourish our individuality, it might just spark the renewed vibrancy in our culture that we so desperately need.

Please note that I realize I must “walk the talk,” and live any advice that I give.  Note, also, that I’m painfully aware of the irony in using this “Collective” medium to convey my message, but we need to start somewhere.

As you some of you already know, I’m currently working on the revision of my second novel in the Reflections of Shadow series.

Progress has been incremental, but satisfying, nonetheless; and I’ve been having a lot of fun moving the story arc through a new, and really interesting, world.  TEASER ALERT: You’ll get to explore the chaotic land of Seteris in this novel!!! (I know, I just blew your mind, didn’t I?)

Much like the first, though, I find that one of the biggest challenges in bringing the second book to life lies in defining the genre (or trying to, at least).  Despite only promoting it as a fantasy series – to better align with the category definitions of many booksellers – Reflections of Shadow is, more accurately, a synthesis of FANTASY, SCIENCE FICTION, HORROR, PSYCHOLOGICAL THRILLER, MYTH, and even ROMANCE.  The story follows characters with such complicated and antithetical points of view, and the plot contains elements of so many genres, that it really changes each time that you read it…

Compared to Nemesis Spawned, which was mainly dark and foreboding – told, as it was, from Alexander’s point of view – the second book (title forthcoming, I promise) will be far lighter in tone and content.  It’ll incorporate some funny and romantic elements, and it’ll introduce a much larger cast of characters, some of whom with personalities so big that they can’t help but change the series with only their presence.

I can’t wait to share the new story with you, and I’ll probably post a few sample chapters in the coming months.  (I blew your mind again, didn’t I?).

Perhaps, by the time the next book is complete, a new genre will have been created which will better define the myriad elements of Reflections of Shadow.  We can call it FaScHoPsyMytRom… Fashosymitrom…?  Okay, maybe we should put a pin in that for the moment, and call it a working genre title…

Filed under What I'm Working On, Writing 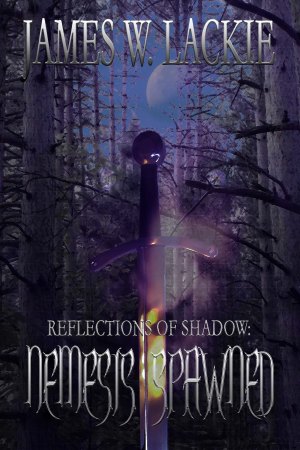 Just click on the link above and use the coupon code SSW25 at checkout
for 25% off during the Smashwords.com site-wide promotion!
(Offer good thru July 31, 2013)

It’s so strange.  When I’m writing fiction, I’m rarely, if ever, afflicted by writer’s block. Words usually flow effortlessly, as if merely waiting for my fingers to touch the keyboard.  But, sit me in front of a blog post page, and it’s like my brain suddenly goes dead…

So, what’s the deal, lately?

Is it that I have nothing to say?  No, I have lots of thoughts, ideas, and opinions that I want to share with the world (my wife’s a little tired of hearing them, apparently).

Is my life that boring?  No, I have many experiences to share (at least, I don’t think it’s boring, but, I suppose, a more adventurous person might disagree).

Am I simply buckling under the pressure to be profound or clever?  Well… (that’s right, James, blame the readers – they’ll love that).

Whatever the reason, here I am with nothing to say.  But, fear not, I do have one idea.

My idea is to ask you for your ideas.  What do you want to see me write about?

Let me know what you’d like to see me discuss.  It can be anything, really, whether it’s writing-related or not.  Because, at this point, it’s either that, or I post videos of my lazy cat… and who’d want to watch that?